In 2013, the Tanglefoot Trail, a 44 mile bicycling and walking trail opened with the head of the Trail in Houston. The Trail draws cyclists from not only the entire northeast Mississippi region but nationally as well. The Houston trail head is located less than ½ a mile west of downtown in a lower income neighborhood with industrial/waste sites. In addition to the Tanglefoot Trail, the Natchez Trace Parkway, a 444 mile scenic drive which is routinely travelled by bicyclists is located 7 miles from Houston. The Tanglefoot Trail, in Northeast Mississippi, is the longest fully built rail-trail in the state at 43.6 miles. The trail goes through seven small towns and three counties and terminates in the heart of Houston.

As part of the development of the trail, the town of Houston was expected to develop a trailhead with amenities for bicyclists. While the town was excited about the potential for tourism that the Trail would bring, they were not sure how to address the needs of the cyclists and just as importantly, use the trailhead to bring economic growth for the entire town. In the winter of 2014, the Chickasaw Development Foundation, the local economic development arm in Houston, asked the CSTC to work with them in developing the trailhead. The CSTC was one of four entities nationally that was awarded a Citizens’ Institute on Rural Design (CIRD) workshop to help facilitate the visioning for the trailhead.

The CIRD workshop explored how to transform the Tanglefoot Trail trailhead into a great community public space and create a stronger connection between the trail and Houston’s downtown. By improving pedestrian and bicycle access to the Trail and creating a phased action plan for its future trail development, the Tanglefoot Trail could transform into a cultural and economic asset for the community.

The workshop resource team, experts in bicycle and pedestrian planning, wayfinding, and placemaking, were joined by enthusiastic architecture students from Mississippi State University to engage the community and identify potential connections, design and programming of the Trail. The Carl Small Town Center (CSTC) and the students of Mississippi State came up with innovative idea gathering tools including a variation of Candy Chang’s “Before I Die” board and a “Connections” map to solicit quick responses from the community about their vision and dreams for Houston. With the help of a big map of the trailhead and it’s surrounding areas, yarn in four colors (for color coding various travel modes) and thumb-tacks, the students were able to map out the current paths and desire lines for bicyclists, pedestrians and drivers to the trailhead.

Since the workshop, the community has been working with the Mississippi Department of Transportation (MDOT) to build an exit ramp off the trail, which will make a critically needed access path to the Houston downtown. In 2016 the CSTC was awarded the American Planning Association’s James A. Segedy Award for Outstanding Student Project for the proposed trailhead pavilion design developed as a result of the workshop. Also, since the workshop the CSTC has designed a phased pavilion for the trailhead space. Phase 1 of the pavilion has been constructed.

The effort in Houston demonstrates the CSTC’s mission to use planning and design to address larger economic and development issues. The physical connection in Houston is not just about trail design, but embraces landscape design, urban design for rural towns, wayfinding and the important contribution that these factors make to urban communities and their economy.

An arbor marks the southern terminus of the Tanglefoot Trail. The attached sign recognizes the CIRD project.

A local resident is interviewed by a local news channel during the CIRD workshop. 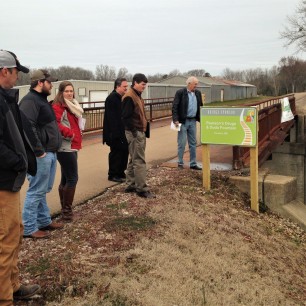 Houston residents share their ideas during one of the design charrettes conducted by the CSTC as part of the CIRD workshop.